Nadeem Yousuf February 07, 2014 Apps, SharePoint 2013
Recently I got rolled off from a SharePoint 2010 project for few weeks. So, I decided to spend some of my free time on SharePoint 2013. Since apps are a new concept in SP 2013 I decided to create some sample apps. I did not make any production apps as I am yet to get allocated on a project which uses SP 2013 apps. In this series of blog posts I will try to share my leanings.
This series will consist of following posts:
Develop SharePoint 2013 apps with NAPA
Access data in Host web
Isolated App domain Setup Issues
Create SharePoint Hosted App in Visual Studio
Provider Hosted App Development Prerequisites
App Event Receivers
Remote Event Receivers 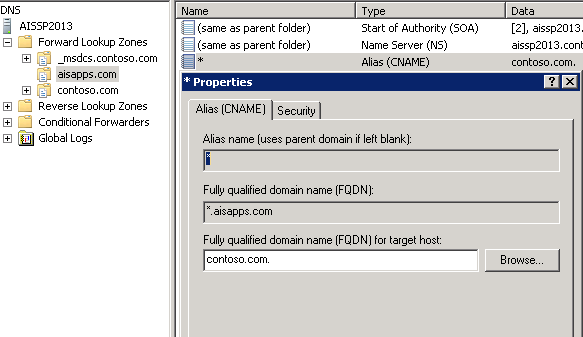 I could ping the new domain properly. However, when I tried to deploy a simple SharePoint Hosted app to my developer site collection I was getting IE 404 error. I tried resetting the IIS, VM restart, adding DisableLoopBackCheck in Registry, but nothing worked. Then I read the whole article again and found that I had not read the section Beware of host headers.
The problem was that the web application of my developer site was host header based. The Url was something like http://intranet.contoso.com. As soon as I created a site without host header like http://machine:portnumber, I was able to deploy the apps.
Few months later I got an opportunity to work on a SharePoint 2013 POC. The set up consisted of a separate domain controller, a SQL Server and a SharePoint server. I created the app domain and made sure that I am not using host header site. However, to my surprise when an app was deployed to the developer site I got the Page cannot be displayed error. The article had again warned of this: Note that selecting the FQDN of the domain in here will only work in single server scenarios. If you are using more than one server you should be pointing to the DNS record of the web server in here. This is either the DNS A record for the web server, or the DNS record of the primary cluster address for NLB environments.

In the snapshot sp2013demo is the name of the SharePoint server which needs to be included.